It’s easy to forget what a big country Sweden is. Just a few hours of driving can transport you from warm summer days in the countryside to cold, rainy days with snow in the mountains. That’s just what happened to us a few weeks ago when I had to heed the mountains call.

We had a longer weekend free of work and decided to go camping in the car for the first time this season. Since we have a lot of lakes and grand forests where we live, I wanted to see something else – as always, I longed for the mountains.

I had spent the previous days cleaning out our van (which we’ve named Walter), a VW Caravelle from -94 and I also built a new bed there and rearranged things so I was extra stoked to be on the road again.

I always feel such a tingle of excitement as we start to roll out of the driveway.

That sense of freedom to see and empty road ahead of you, not knowing what awaits along the road – I can tell you it’s the best feeling in the world! We decided to drive across the country and slightly north, towards Åre and beyond. We wanted big mountain vistas and almost drove all the way to Norway.

A part of me wanted to cross the border but I know that adventure will come later in summer.

We stuck to the smaller roads, as always – it’s a calmer drive and a more scenic route. The journey get’s a bit longer of course, but for me the journey is a big part of it all. I don’t want to simply go from A to B. We listen to music, talk to each other, enjoy some snacks and stop whenever we want to rest or take photos.

The mountains called and I had to go,
even though it meant leaving summer behind for a few days.

The green trees and bright sunshine slowly changed into darker colors and it started to rain. As the road wound on, the rain continued and the greenery of summer continued to grow sparse as we drove on north. Finally I could see the mountains looming in the distance.

It wasn’t until we noticed that it looked more like autumn here, and that the mountains was covered in snow that we realized it – we had left summer behind for a few days.

We came accidentally came across such a huge rapid called Handölsforsen. I have previously been to Sweden’s largest waterfall Tännforsen but I must say this one felt bigger and more powerful. A sign pointed us towards a lookout and that meant crossing a bridge that stretched across the roaring stream… It was a bit scary and I could definitely feel my legs shake. I don’t know if it was due to the height or the power of the water but it sure sent my adrenaline running a wee bit faster.

After hiking up to enjoy the powerful rapid for a bit and take some photos, we walked back down and I had to cross that dreadful bridge again haha. It was getting late and we drove on to find a spot to camp. There we made a simple dinner and had some snacks before going to bed.

In the morning we made coffee and ate a bit before we headed out again. Even though they’d loomed in the background for a while, my hunger for mountains was not sated so we consulted the maps for a bit and then decided to drive to Storulvåns Fjällstation.

It really was not part of our plans and whilst we did want nice, warm weather it was well worth the trip because the mountains really took my breath away and honestly, they look pretty darn good in this type of weather. Standing in the wind and rain taking in the big mountain views – one definitely feels pretty small and you realize just how big and powerful nature is and it’s such an awesome feeling!

Update: Daniel from Traveler’s Edition informed me that these mountains are called Snasahögarna, he has been there a lot it would seem.

He told me that the middle peak is called Norder Tväråklump and it’s connected to Sönner Tväråklump which you can kind of see at the right side of the image above. Behind them is the mountain Getryggen which is situated right next to Storulvån Fjällstation.

Looking back on these photos I feel as if I’ve been to Iceland – or what I imagine Iceland looks like. One of my biggest dreams is to do a roadtrip on Iceland and I hope I get to do that soon.

What is your dream destination / adventure? 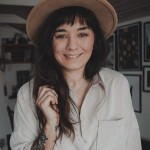